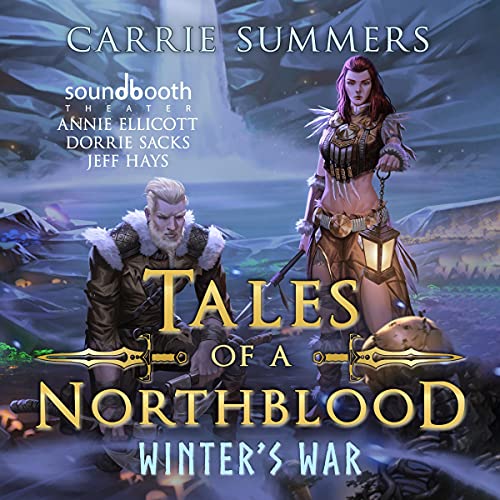 Winter's War: A LitRPG Saga (Tales of a Northblood, Book 3)

Jace's old life is gone. Earth is a memory, replaced by a game world where survival itself is a challenge. But even if given a choice, Jace would never go back. He is a Northblood now, descendant of a proud barbarian lineage that once reigned over the chill realm he now calls home.

Despite the challenges beaten so far, nothing can prepare him for the looming contest. Long buried beneath sheets of ice in the far north, a barrow has been opened. The evil that struck down the Northblood during the height of their power rises again.

What chance do Jace and his friends have against the darkness that brought down a nation? Scroll up and buy now to find out.

Your audiobook is waiting!
Learn more about membership
List Price: $19.95
You Save: $4.96 (25%)
By completing your purchase, you agree to Audible’s Conditions Of Use
Sold and delivered by Audible, an Amazon company

People who viewed this also viewed

People who bought this also bought

Related to this topic

James A. Murphy
5.0 out of 5 stars Great book but what's next
Reviewed in the United States 🇺🇸 on February 9, 2022
Verified Purchase
So I found tales of the Northblood before I found the Stonehaven league but quickly read the older books once I realized they took place in the same game world which made both series more enjoyable these are good stories well told, but I'm writing this review to point out the author isn't forthcoming with whats next in either series, as I'm writing this review the third book in the tales of the Northblood series is about to be a year old and no where on anything that links to this author is any news about what comes next she's happy to give links to her website but that doesn't appear to have been updated since 2019 the announcement part even longer, in the afterword in these books she talks about new books in the Stonehaven series but there isn't news about any of that or anything else forth coming no notices on amazon about pre-orders just nothing maybe if I subscribe is her very 90s email list I don't think I'll get news, maybe there's another more fan centric site I don't know about but I liked this I won't more but have zero clue if I'm going to get more
Read more
One person found this helpful
Helpful
Report abuse

Clint Young
5.0 out of 5 stars Alert
Reviewed in the United States 🇺🇸 on June 4, 2021
Verified Purchase
“This was a fun book. I am glad that I read it. You should try it too.”

I am not going to share my reasoning, thoughts on the book, or any opinions that would influence your decision to read it. I am simply saying that I liked it. I would like you to read it and make your own decision. After all, you are a much better judge of what you will like than anyone here.

I will happily discuss the book with you on Goodreads if you are so inclined. As always, I am open to debates and arguments, but also vain enough to seek acknowledgement, so feel free to roast me or applaud my efforts. Either is acceptable, because if you are paying attention to me then you are at least considering the book. And THAT my friends is exactly why you see my comments here.

Dave Colello
4.0 out of 5 stars Liked it, but too much rockclimbing
Reviewed in the United States 🇺🇸 on May 24, 2021
Verified Purchase
Seemed like an awful lot of rock climbing got put into this book for no particular reason, and the trilogy felt rushed to an ending for my taste. I really liked Stone Haven League, but this trilogy just didn't do it for me as much.
Read more
Helpful
Report abuse

Rex Schrader
3.0 out of 5 stars A bit of a letdown after the first two
Reviewed in the United States 🇺🇸 on June 19, 2021
Verified Purchase
I love this author and have read all of her other books, but I felt like this story was a bit of a letdown from the first two. The revelations at the end of the last book (that they were trapped in a game world) seemed to have taken a big chunk of the dramatic tension out of the story overall. I found that I had a real hard time caring about the travails of the MCs since the stakes are so dramatically lower. Additionally, the ending was very anti-climactic.

Don't get me wrong, the story is well written and has that juicy LitRPG goodness . . . it just wasn't enough to overcome the lack of tension.
Read more
Helpful
Report abuse

Zerdath
5.0 out of 5 stars Fantastic
Reviewed in the United States 🇺🇸 on May 19, 2021
Verified Purchase
What else can I say? Third book, so presumably you've read the first two books. If you have, pick this up, it's a great continuation of the story. The conclusion felt a bit rushed/anticlimactic, but that happens in life as well, and it all made sense in the end.
Read more
Helpful
Report abuse

Kindle Customer
5.0 out of 5 stars A good conclusion
Reviewed in the United States 🇺🇸 on April 14, 2021
Verified Purchase
I like that this wound up being a trilogy, and this book was a.good.conclusion to said trilogy. And I.do very much look forward to more stories with this world and these characters.
Read more
One person found this helpful
Helpful
Report abuse

M. Kea Smith
5.0 out of 5 stars A King, a Lich & Bondmates
Reviewed in the United States 🇺🇸 on April 22, 2021
I was very impressed with the authors creativity. She shows it not only in the characters, but in the gameplay as well.

Jace,Mac, River, & Seth work together to cross the highest mountain, ens up meeting some Ice Dwarves. After helping them solve a problem, they move on together with Hesh & Kayla to solve a World problem with only the skills & magic they have: the barbarian ."tank", a shaman, a healer & a necromancer.

Scott Osmond
4.0 out of 5 stars Up North With The Cold
Reviewed in Australia 🇦🇺 on April 15, 2021
Verified Purchase
This was a good close to this story ark. In this entry we learn about the ancient curse and how it all came about. Jace and his companions have to travel north across the icey plains to close the barrow or destroy it. I liked the descriptions of the journey and hardships found in the mountains and on the ice. Fortunately this crew were up to the challenges. The ending was a bit quick but considering the setup it worked. Looking forward to the next story ark.
Read more
Report abuse

George
5.0 out of 5 stars Great Series, Want More!!
Reviewed in Canada 🇨🇦 on September 16, 2021
Verified Purchase
This was a phenomenal storyline and characters. A very interesting take on Litrpg storytelling! I can certainly see the necessity for furthering this very interesting tale.
Read more
Report abuse
See all reviews